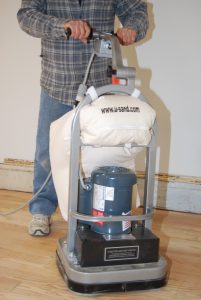 Cherryhill Manufacturing Corporation is a privately held family run company, founded in July 1999 as a better way of finishing hardwood floors. Our company has been creating and promoting random orbit floor sanding equipment for 20 years.

Our equipment is available through a variety of rental stores nationwide including True Value, Ace, Do it Best, Sunbelt, and  Orgill. If you don’t see our sanders at your local store ask them about becoming rental location for our products.

After realizing that unskilled workers will ruin the best quality hardwood floors, Cyrus Kirsch went to work developing a better way to finish hardwood floors.  Cyrus owned/operated his own wood shop and was selling hardwood flooring to several area contractors. Roger Barnes, one of these local contractors, came to him with a complaint.  His employees were ruining floors that were recently installed because they didn’t know how to control the drum sanders he had.

Over the next few months Cyrus and Roger brainstormed on how to develop equipment that could fix this problem. Cyrus had already made a lot of the equipment he used in his woodworking business.  He often modified older equipment for his needs as well as completely designing and creating his own.  After several attempts, they had a prototype product they knew would work.

After using the unit, they thought a lot of other contractors might be interested in what they had created too. They got the unit patented and formed a company to build and market the U-Sand Orbital Sander.  July 1, 1999 the paperwork was filed to begin operations.

Once the UL approval came through it was up to marketing. True Value was the first rental chain to take on the new floor sander. After joining the ARA (American Rental Association), attending the annual shows, and meeting other rental store owners, more rental chains began to offer the equipment to their customers.  In just two years, Home Depot began purchasing units for the East Coast area stores and, then by 2003, all the US stores had units in their rental departments.

It’s hard to believe twenty years have passed!  Roger passed away in 2004, and the company has experienced all the ups and downs of the rental/construction industry.  (The slow down of 2007 was felt by our company months before the media began chattering about it.)

All things considered its been a great adventure.   We plan to continue offering the best user-friendly sanders for another 20 years.